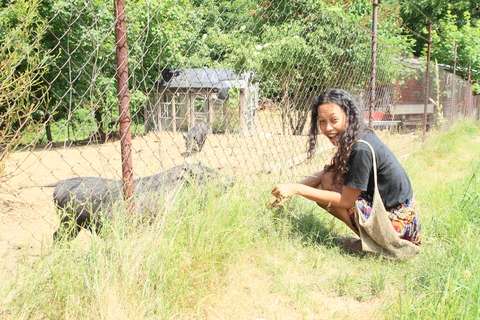 Although 90+ degree days have me looking forward to fall, it’s still a ways off. Nevertheless, it seems it’s already time to talk about animal flu since we’ve had a couple of cases already this year (and that’s point one: clearly, animal flu has an earlier season).

Swine flu, bird flu, seal flu, dog flu, horse flu… the truth is, some of those strains overlap but live happily in different animals. Some of them are similar enough that we worry about proximity of different animals leading to sharing genes that make them threatening (like when birds who carry flu roost next to mammals who carry a different flu).

Most news stories report the least serious modes of transmission and symptoms (regardless of reputations for pot stirring). And in most cases, that’s true. But with flu, prevention is half the battle, and learning a little more is key to prevention.

A virus who is good at its job doesn’t actually kill its host, so human strains of flu are well-trod and only threatening to people with weakened immune systems (although they’re awful for everyone). But when a strain jumps between species, it’s not attuned to that host, and might go too far making them sick, so that you see more people with severe symptoms. That’s the bottom principle behind why any flu strain associated with an animal gets a tinge of fear tied to it (and why something “new” like Ebola can be so horribly virulent).

That leads into the biggest thing to remember: flu strains are constantly changing, bit by bit. It’s why they have to develop a new vaccine every year. That’s good and bad: the swine flu strain that most prominently jumped to humans isn’t really headline worthy anymore. But there are others strains out there, and the looming possibility of flu strains sharing genetic information that makes them more powerful.

Gene sharing is the big threat that causes worry; for example, a mix of the bit of swine flu that can jump to humans with one of the virulent bird flu strains would be a disastrous, possibly world-headline event.

How do animal flus transmit? Many strains require close proximity to an infected animal, although recent years have given evidence that a few are becoming airborne (testing is difficult and there isn’t enough evidence to be definitive). Close proximity basically means getting close to an infected animal, usually at a petting zoo, fair, or hobby farm, or caring for an infected person (MERS, which is thought to have jumped from camels, is the same).

Here’s an important side note: that just means “to human” transmission. Some of these strains seem to have a pretty wide range when it comes to infecting animals (for example, the Chinese bird flu outbreak would take out flocks within several blocks of each other but humans seemed to require closer transmission). So take note of outbreaks in your area whether you’re a hobby farmer or just plan on going to fall activities that will have live animals. If you are raising animals, fowl or furry, consider giving them a little more care during winter months.

Other than those slight differences, it’s still the flu, and a lot of the same rules apply. Hand washing prevents a lot of transmission (and note, animals can be a good source of MRSA if antibiotics are overused on them). Keeping things humid also helps prevent transmission. You can support your immune system with colloidal silver, and should generally follow basic health guidelines to keep it strong (like sleeping enough, eating right, and working more movement into your day).