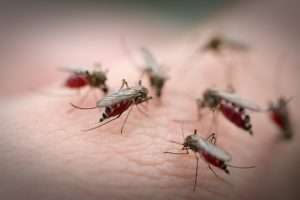 The CDC issued a new report this week citing the large increase in vectorborne illnesses, in other words, illnesses from ticks, mosquitoes, and other insects. Since 2004, tick borne illnesses doubled (mostly Lyme Disease cases), with indications that the number of people infected was actually underreported (meaning there’s evidence it more than doubled).

While the Northeast is still the biggest source for ticks that carry Lyme, it’s been spreading west over that time; plus there are the other tick borne illnesses like babesiosis, anaplasmosis, rickettsiosis, heartland disease, etc., to consider. Throw in mosquito borne illnesses and that we’re expecting the unexpected (new diseases to appear or migrate from tropical regions), and that’s a lot to prepare for. Luckily, the same broad strokes can help you be as prepared as possible.

Keep up immune system support with colloidal silver. When you never know exactly what could happen, general support is the best way to stay ahead and be prepared.

Then do your best at prevention:

West Nile virus is transmitted by ticks that are most active during dusk and dawn, tropical illnesses like Zika, Yellow Fever, and Dengue are transmitted by Aedes aegypti, which is not only active for a much larger window, but likes to live in your home—making all those clever citronella devices moot. And with more houses being built right up against nature, ticks aren’t just a hiker’s problem, they’re a backyard problem for pets and people.

Bug proof your yard by making it undesirable for mice, deer, and other mammals that carry ticks, and by drying out even tiny puddles where mosquitoes might leave eggs. Air conditioned homes are less desirable for Aedes aegypti, otherwise there are plenty of non-toxic treatments to help keep them from nesting with you.

Get started on prevention this summer with colloidal silver, then work on keeping bugs out of your yard.