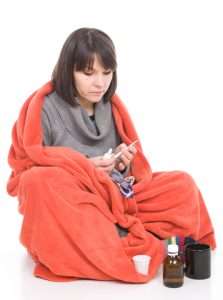 We were promised a mild flu season. Then, three weeks ago, headlines touted the peak of flu season. But it’s actually going worse than last year, and now the prediction is that peak flu season is still weeks away.

In some states, flu season is comparable to last year. In others, it’s starting to surpass it. California is saying this could be their worst flu season in a decade. One of the reasons is that one of the most active viruses this year is Influenza A’s H3N2, which is known for its virulence.

Your first line of defense against the flu should always be hand washing. If done correctly, it reduces the chances of catching the flu by a higher percentage than the flu shot. Hand washing should tally up to 6 or more times a day, from every time you use the bathroom, to before eating or working in the kitchen, and after spending time outside (especially in crowds). The other trick is to do it long enough: 20 seconds is longer than you think! Between washing your hands, avoid touching wounds, eyes, nose, and mouth.

Flu is contagious before you show symptoms, so you might not be able to avoid it 100%. That means you need to be taking care of yourself and supporting your immune system by eating well, sleeping enough, and avoiding stress (activities like volunteering, meditating, and hobbies can help). For an extra boost, work colloidal silver into your day. Colloidal silver can help support your immune system every day, so you’re ready for the flu and more

If you get sick despite best efforts, rest and fluids should be top priority.