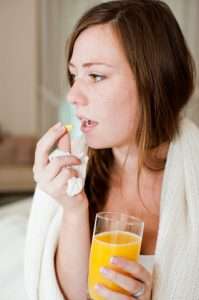 A universal flu vaccine with a lasting effect does not yet exist. So researchers are exploring other antimicrobial agents—and silver is a natural choice, as it has a long history of use as a disinfectant and antiseptic. Nanosilver is even more effective–and what researchers used to test out their theory.

And, of course, it succeeded at killing the virus!

Important to note that it was in a petri dish, which is different than an in body study. Fortunately there are other studies on humans (like this one showing how silver leaves the body, or this research in India).

Research into nanosilver has exploded in the last few years, and is especially common abroad where serious diseases, like rabies are still somewhat common.

Particle size is of critical importance when we’re talking about silver, gold, etc. A smaller particle size means it’s more effective—easier to pass through cells and the body, better at attacking pathogens (you can really see a good example of this in the DOD ebola study).

Also important for efficacy is to NOT use ionic silver, which is more reactive. Concentration also plays a part in efficacy (higher is usually better).

The study on silver vs. the flu did not explore ionic/non ionic, concentration, or other factors.

Silver won’t be replacing the flu vaccine anytime soon, but it is being used as an antimicrobial surface in hospitals, both around your room and on devices like catheters. It’s also still commonly used to help burn wounds heal.

Colloidal silver was common before the discovery of fungal antibiotics, which were far cheaper and quickly replaced it. But as antibiotic resistance builds up, researchers are turning back to silver to harness it to fight disease like MRSA, and even the flu!