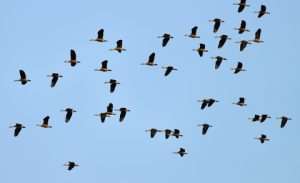 But wild ducks have brought in a virulent strain of Bird Flu: H5N2.

Most people don’t have to worry—commercial chicken farms haven’t been infected (yet, but we’ll keep you updated). People living in Washington or Oregon, though, need to watch any birds they’re raising. Owners of the infected flock said it was clear they’d caught bird flu, as several birds were suddenly dying.

Contamination is thought to have passed between flocks because the owners were friends who would trade birds, but I’ll note for any bird lovers reading that in past Chinese outbreaks of bird flu, it’s been able to travel a few city blocks to infect other birds despite strict quarantines. If H5N2 is airborne (for birds) then the same risk could be present.

Several hundred birds have already had to be euthanized, with the USDA compensating owners. The outbreak may be contained, although government agencies (here and abroad) are reacting cautiously. Another wild duck was found with H5N2 down the coast in California.

Do Humans Need To Worry?

Yes. Well, a little. In a Japanese outbreak of H5N2, poultry owners had elevated levels of H5N2 bird flu antibodies—suggesting they’d been infected by close proximity. For now, if you aren’t visiting a chicken farm anytime soon, you have little to worry about. But given how fast other strains of bird flu have mutated, it’s still best to keep an eye on any outbreaks close to home!

You should also keep tabs on any poultry coming out of the Pacific Northwest—maybe even set up a Google alert for “‘your favorite brand’ + recall”.

And don’t forget to keep your immune system strong. It’s not just birds having a bad flu season—people are, too!

Canada has also dealt with a recent bout of bird flu, and is just waiting a few months before declaring themselves officially bird flu free.

Taiwan is dealing with an outbreak again this year—with an H5N2 variant as well as H5N8.

Any backyard breeders out there? What precautions are you taking?