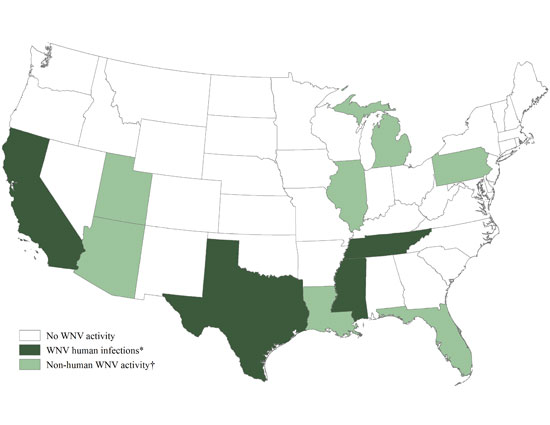 Symptoms of west nile virus: last year a boy was paralyzed (though he’s recovering well!), some die, this year there’s already been one death.

Most people won’t notice any west nile virus symptoms, but about 1 in 5 will feel like they have a severe case of the flu: fever, aches and pains, headache, chills and sweats. A small percentage will have more severe (and dangerous) symptoms of west nile virus: brain infection/inflammation which causes stiff neck and possibly an altered mental state.

Check the map to see if west nile virus has been reported near you yet (California has a ton of it, and is the location of the first death). Then go make your yard inhospitable to mosquitoes: no standing water, citronella candles, and maybe encourage birds (some eat mosquitoes) with a bird feeder. (Although mosquitoes also feed off birds, and it’s actually one of the ways west nile virus spreads. But that’s more of a regional sort of spreading—if birds in your area already have it, you might as well encourage them to come hang out and eat your mosquitoes!).

The biggest thing you can do to avoid west nile virus symptoms is to not go out during dawn/dusk (unless you’re in Florida, then you have scary, giant mosquitoes to deal with during the day). That goes for your pets, too—try to get your dogs potty break in before the sun starts to set, and bring outdoor cats in (if you can find where they’re lurking!).

Many counties have started spraying for mosquitoes in the hopes of avoiding another horrible west nile virus outbreak like we had last year, so be careful where you picnic, walk your dog, and play—it might be soaked with chemicals (and many places tend to use hormone disrupting chemicals, based off the THEORY that it will only affect the targeted pest and be less or non-toxic to humans/the rest of nature than a general pesticide. Yeah, okay, uh-huh. We’ll see what they say about it twenty years from now).