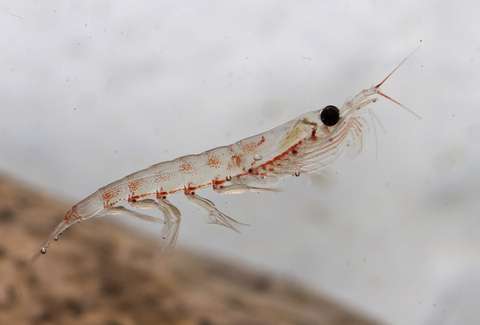 Wondering why astaxanthin is featured so prominently in our krill oil supplement? Because it’s a really powerful antioxidant that supports health in a lot of neat ways.

Astaxanthin is what gives Deep Ocean Krill Oil its red color—as well as the red color of other shellfish, salmon, and some birds. Krill has a particularly high concentration of astaxanthin (which they get from their algae diet).

While a normal amount of inflammation is healthy, we tend to get too much because of modern dietary and other lifestyle issues that trigger a cascade of problems. Adding some antioxidants to the diet helps balance it all out.

Astaxanthin in particular may also have a number of useful functions, like inhibiting processes associated with oxidation and ultraviolet damage. Some clinical trials have even suggested it may be helpful with aging!

While you can get some astaxanthin from your table by eating red sea foods like salmon (remember, color is often a good indicator of nutritional quality!), you’d have to eat quite a bit to really get enough, and that would become both expensive and calorie heavy pretty quickly! Instead, cheat and add a concentrated amount to your daily nutrition with Deep Ocean Krill Oil—which has numerous other benefits, since it’s easily digestible and packed with other nutrients, too! And you know it’s a natural source of astaxanthin, rather than a slightly different synthetic source (remember to always read your labels!).

Astaxanthin is many times more powerful than beta-carotene, which is in the same class of antioxidants, and which you might be more familiar with. In fact, it’s also more powerful and efficient than several other antioxidants, including CoQ10, Vitamin C, and green tea catechins (although obviously, these antioxidants all have multiple functions and each have their own place in the diet, but having a superhero among the regular workers is nice!).

Have you switched from fish oil to krill oil yet? Let us know in the comments!