Does Your Waiter Have Norovirus? 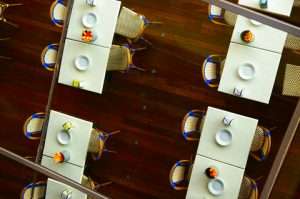 Or maybe the chef? Apparently 1 in 5 food service workers say they’ve gone to work with Norovirus symptoms—nausea and vomiting. Now, food service workers don’t get paid time off, and could lose their jobs if they don’t find someone to cover for them, so it’s hard to be mad.

While you may be skipping a cruise this summer because of the reputation they’ve gotten, cruise ships are actually kept pretty clean, it’s the state side eateries you have to be aware of. (As far as cruise ships go, it’s the other passengers you need to watch out for!).

Research says it’s the handling of ready-to-eat food with bare hands that causes the spread (which sparked the ridiculous gloved-sushi-prep law in California). With frequent hand washing, much of that contamination can be reduced, but most people don’t value hand-washing enough!

You can stay healthier when eating out by avoiding salad bars, they still are one of the germier places, even if they don’t make headlines as much as they did in the ’90s. Wash your own hands frequently (hand sanitizer won’t work), and support your immune system with colloidal silver. When at the grocery store, try to avoid the ready-to-eat foods, they are the source of a lot of outbreaks and recalls.

And of course, if you get Norovirus, try to stay home. And when you get better, clean like crazy. There are few things that will really kill Norovirus, so while I’m pro natural cleaners, bleach is about the only thing recommended. There aren’t enough studies, but what has been researched shows that colloidal silver renders the virus harmless.