What You Need To Know About Listeria 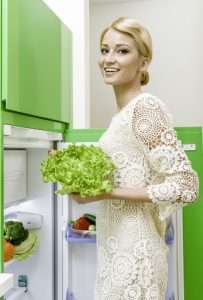 Who doesn’t like ice cream and hummus? You probably have one or both in your fridge/freezer right now, but two common brands (Sabra and Blue Bell) have had recalls recently.

It’s the start of Listeria season, when fruit, veggies, deli meat, frozen dinners, and other pre-made/packaged foods are at an increased risk for the deadly form of food poisoning.

What you need to know about Listeria:

-It survives cold temperatures. Putting food in your fridge, or even your freezer, won’t keep you safe from this particular stomach bug.

-Listeria is long lasting, and under-reported.

For people with strong immune systems, Listeria caused food poisoning/stomach flu isn’t different from other stomach bugs, so they aren’t likely to go to the doctor, or have a culture taken if they do. So there are probably more cases of Listeria than we know about.

-If you have a weakened immune system, you NEED to know about foods that could be contaminated with Listeria!! This goes beyond following food-recalls, which are often too-little too-late. Listeria can be deadly for people with weakened immune systems, including pregnant women, older people, and young kids.

The no-no (or cook it first list) includes foods like deli meat (more so the prepackaged stuff than the over the counter stuff, but both carry a risk), pre-chopped/peeled fruits and veggies or salad mixes, soft cheeses (just check the label—you can eat it if it’s been pasteurized) and other prepackaged foods like ice cream, hummus, yogurt, frozen meals, etc. Your doctor can give you a longer list, but no list will be truly complete, so you’ll have to pay attention to your groceries and recalls.

-You can avoid Listeria! You just have to spend more time in your kitchen. Making ice cream yourself can be a fun summer treat, and hummus is pretty easy to make too. Chopping your own fruits and veggies on your own clean cutting boards is another obvious step to take.

Remember: it all boils down to the relative strength of your immune system, so keep it strong!

When it comes to avoiding food poisoning, a strong probiotic colony is essential! Nurture one with culture rich foods like yogurt, or go the straightforward route with a supplement.

You can also give your immune system general support with colloidal silver!

What are your thoughts on Listeria? Does it impact your shopping list?