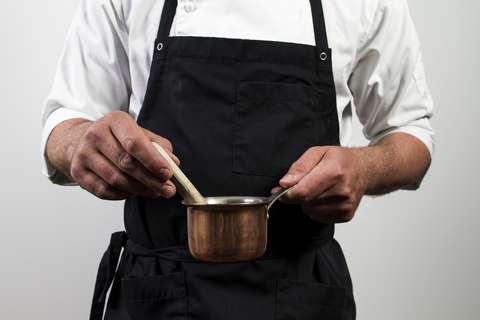 There are colloidal supplements, and then there are ionic solutions. And they’re not the same thing—the difference is important, especially when it comes to supplements.

We’ve written a lot about that—a pure colloidal supplement is a suspension of non-ionized particles in pure water, and smaller particle size leads to better quality. Because they’re suspended, you can see light reflecting off the particles—gray/blue for colloidal silver, orange/red for colloidal gold and copper, and so on. With ionic solutions, the charged particles attract to the water particles, and disappear—creating a clear solution (and sometimes, come advertised in glass containers to keep it from being affected by plastic—this problem doesn’t exist with colloidal products).

Here’s the thing: I know there are others out there saying the exact opposite. So let’s look at it from another angle, one that you might already be familiar with: pots and pans.

You probably already realize what you cook with in the kitchen is just as important as what you eat—even if you only read headlines. After all, teflon (and the literal canary in the kitchen, as many birds dropped dead after being exposed to fumes from the non-stick pans) was in the headlines for a long time.

And then there’s aluminum, which is linked to problems like Alzheimer’s, and also often recommended against.

Or you might be familiar with cast iron—great to work with, if you know what you’re doing and care for it properly.

But let me get to the point: if you’ve ever worked with copper, you might know that it comes with two rules to follow (search copper pots, and you’ll likely find these on manufacturer websites):

They aren’t just trying to sell you copper polish (for what it’s worth, you can use alternatives like a salted lemon halve). Allowing your pots to develop a patina means that if they come into contact with an acid, they’re going to release copper ions into your food, which isn’t healthy or safe, especially if you’re cooking every day! If you want to show off some copper with a nice patina, get art. It doesn’t belong on your pans!

And ions don’t belong in your supplements. For the same reasons, you don’t want an ionic supplement, and when it comes to copper and gold, it can be really, really bad for you to build up those ions (less so with silver—but it’s still safer and more effective to stick to a true colloidal silver).

What are your thoughts and questions on the differences?