HPV has had a well funded PR campaign for almost two decades. For a refresher, it’s the series of viruses tied to warts and cancer (cervical cancer is the main one, but it’s possible it can cause cancer in other parts of the body, like the throat). It’s spread by skin-to-skin contact, and is fairly common (although a vaccine can prevent some of the worse big-bad strains from infecting you).

Here’s something that upon reflection, should be sort of obvious but is just now be fleshed out by studies: having a robust colony of good bacteria may help lower the risk of being infected by HPV, and thus developing cancer, warts, and other side-effects.

Your body is more bacteria than human. Ideally, it’s mostly friendly, beneficial bacteria, but sterile environments, how we’re born, what we eat, where we travel, who we touch, illnesses, medications, and so much more can change that composition. The biggest, best studied reservoir of good bacteria is in your gut. We’ve learned gut bacteria doesn’t just aid digestion and help fight off/crowd out the pathogens you eat, but influences weight, mental health, and how our whole body functions. The next best studied probiotic colonies, on the skin, aren’t just incidental bacteria—they affect our risk for infection (and will it be MRSA or something tame?), eczema, rosacea, and more.

And then there’s all the genital bacteria, which naturally, is a bigger deal for women. (Men can get jock itch, but it’s more likely and a bigger deal for a woman to get a yeast infection). When babies are born, their delivery method confers the usually good vaginal bacteria, or the less good skin bacteria, and studies have shown long-term effects from both.

Taking care of that bacteria has only received a fraction of the spotlight our gut bacteria has. For example, low-sugar/no added sugar yogurt has long been a folk remedy for helping to manage and prevent yeast infections because it’s a fermented food that delivers a renewal of good bacteria, similar to how it helps manage stomach upset. But given the parallels, it’s not surprising that it would behave similarly in helping or hurting when viruses and other pathogens invade—like HPV.

Because cervical cancer is usually caused by a virus, it makes sense that research has unravelled a correlation between the type of bacteria you carry and your risk not just of getting HPV, but developing negative effects from it. While more research is needed to prove causation, there’s something pleasant when something so obvious is revealed. If stomach bacteria fights of and crowds out pathogens, why wouldn’t it be true in other parts of the body?

While there’s no guarantees in life, there are plenty of reasons to make sure you are supporting a good bacterial colony each and every day. Eat plenty of probiotic rich foods like yogurt, kefir, or certain canned foods. Healthy habits like eating produce and exercise help those bacteria to then flourish. And if you want more consistent support, or get off track because of illness or antibiotics, be sure to boost yourself with a probiotic supplement like Flora MGR. 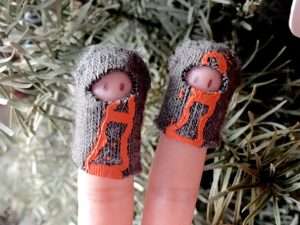