This summer’s Flu news does not bode well for winter. With the outbreak of Swine Flu at the Indiana state fair, pork futures have taken a hit—people seem to be anticipating a bad year for Swine Flu (H1N1).

Of course, Swine Flu is NOT spread through meat, especially if the meat is properly handled and cooked (of course, pork, as well as beef, can still have parasites, bacteria, and other problems when not cooked through or when raw meat touches something you then eat). Even if you have a weakened immune system, properly cooked pork is absolutely safe to eat.

But that doesn’t mean that Swine Flu won’t spread, especially in areas, like Indiana, where pigs are raised. 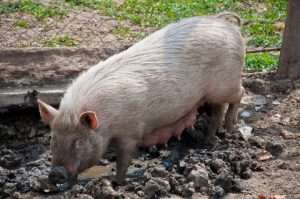 Swine Flu is only airborne in close proximity, which is to say if someone sneezes or coughs next to you (like in the grocery store, on an airplane…). It’s also spread through contact. Like Bird Flu, most cases of Swine Flu occur only through person-person transmission, and there’s little risk that thousands of people could be affected.

Unfortunately, Flu mutates. And scientists are closely watching for mutations among the more notorious flus, which all seem to be named for animals (Bird, Swine, Seal…). We know from laboratory experiments that many Flu strains aren’t far off from either becoming airborne on their own, or joining with a non-human strain that is airborne.

If this Flu season hits as hard as is currently predicted, it may pay off to start protecting yourself now. Eating right, exercising, getting enough sleep and supplementing to fill gaps all help boost your immune system. If you want to take it a step further, hit up a massage parlour—it will relax you (good for your immune system!) and the touch will stimulate your immunity as well. Just make sure your masseuse isn’t sneezing!

And why not stock up on MesoSilver? Shipping rates go up in winter, so if you’re going to stock up, start doing it now.

What do you think? Is this going to be a bad Flu season, or just a regular one?