What’s typically called swimmer’s ear (though not caused by swimming in this instance) is an outer ear infection. When the part of the ear you can see becomes red, flaky, swollen, or just tender to the touch, it’s likely outer ear infection symptoms.

It can happen to anyone, although kids are most affected. With goopy eyes, a runny nose, and perhaps tossing and turning at night while you struggle to sleep, you somehow manage to cross-contaminate your respiratory illness to your ear.

Maybe it was your pillow. Maybe you sneezed so hard your ears were ringing so you tugged an ear lobe. Either way, you now have the unbearable pain of ear infection symptoms on top of your cold or flu.

The prevention? Blow your nose before bed, then wash your hands. Better yet, do one or two sinus flooding procedures to help clear out all of your sinuses, and keep the pathogens from your eyes too (which are also at risk for infection). And don’t just wash your hands once, do it a bunch of times. It’s the single biggest way to prevent the spread of cold and flu—even from yourself!

If you have ear infection symptoms (pain in the ear, muffled sound, a red ear drum) but it’s not the outer ear, the next most likely candidate is the middle ear—and it’s far more likely to get infected by the cold or flu than the outer part!

Your ear is connected to your respiratory system via eustachian tubes, whose normal function is to drain the middle ears and keep them clean, as well as to equalize pressure (popping the ears).

When your sinuses are backed up, it becomes harder for the eustachian tubes to drain, and suddenly they’re likely to cause ear infection symptoms like severe pain, and symptoms of an infection (like fever) that may be masked by the existing respiratory illness.

A sinus rinse is the best way to prevent the blockage caused by a sinus infection. And for either type of ear infection symptoms, it’s always important to see a doctor, since complications from common illnesses like this usually mean you’re not getting better.

What are your get better tips for the cold or flu? Share below: 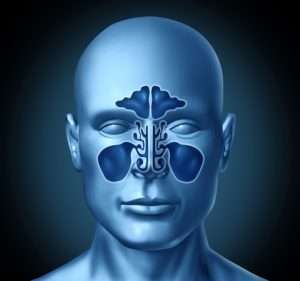