You Can’t Cheat The Flu 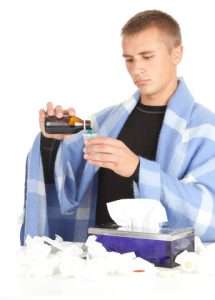 Whether you take acetaminophen or another fever lowering drug (or a cough syrup, anticongestant, etc. that has that ingredient) it’s important to remember you aren’t curing yourself, you’re just treating the symptoms.

And, in fact, you may be increasing the duration of your illness as well as spreading it to others.

High fevers are dangerous, they can cause long term damage. So it’s kind of become par-for-the-course that when we get fevers, we immediately try and break them. BUT fevers are a symptom of your body healing itself, and a low grade fever isn’t something to jump up and panic over (unless you have a preexisting condition that it would complicate).

Low grade fever kills the virus, and without it the virus lasts a little longer.

The researchers, in another example, suggested that widespread use of Aspirin during the 1918 Spanish flu pandemic “may have increased the disease severity and consequently death rates.”

Also without the fever, there’s an increased risk of feeling well enough to go out and about (especially if other symptoms are also suppressed, like coughs or congestion)—which leads to spreading the flu to others (it also means not letting yourself rest and recover).

Take medicine if you need it to recover—if you can’t sleep because of a cough, or are tossing and turning from a fever sweat. But actually stick around and recover! Fighting a virus takes time. Don’t go out running errands because you’re not at work on a weekday, just because you feel a little bit better after a long sleep and some medicine.

Rest. Eat (even if you don’t feel like it—and make sure you eat a lot of protein, it helps when you’re sick). Take a multivitamin and other supporting supplements.