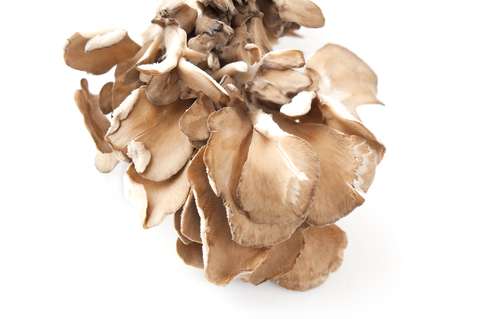 Maitake Beta Glucan Extract can be generalized as a way to boost and balance the immune system. It’s made from mushrooms with long histories of medicinal use in East Asia and ongoing studies looking more in depth at their effects.

Let’s take a closer look at the ingredients in Maitake Beta Glucan Extract:

Maitake (“dancing mushroom”), which you may be more familiar with as hen-of-the-woods is the star of the show. It has the most modern studies documenting its benefits, including phase 1 and 2 human clinical trials. Conducted by Memorial Sloan–Kettering Cancer Center, the trial found that maitake stimulated the immune system of breast cancer patients. Other smaller studies (human, in vivo, and in vitro) showed maitake increased production of immune cells, and can cause apoptosis in cancer cell lines (meaning it kills them) and anti-metastatic properties (stops cancer spreading).

Beyond its possible benefits to the immune system, maitake appears to have a hypoglycemic effect (supporting diabetic health) and has antioxidants that may help with asthma.

Next up is Reishi mushroom, one of the oldest medicinal mushrooms. It also has a few studies under its belt, and they suggest it has similar immune supporting anti-cancer properties to maitake. Researchers have suggested reishi mushrooms might be beneficial as an addition.

Shiitake has the same long history of medicinal use, and beyond the immune support that mushrooms offer, it’s used to support weight loss, cardiovascular support, and energy.

Finally is agaricus, with preliminary studies suggesting a long list of benefits, including more immune and cancer support, but in this case anti-tumor and antimutagenic properties (with some nice bactericidal thrown in for further immune support).

You can see some big overlaps between the different mushrooms, but they each offer something more, too.

Have you noticed a change from Maitake Beta Glucan Extract like increased energy levels? Share in the comments: