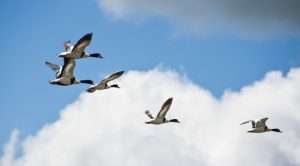 The bird flu outbreak that began in the Pacific Northwest is spreading along the Pacific Flyway, which covers the western United States, and even reaches into parts of western Wyoming and Colorado. The Pacific Flyway covers all of Alaska, extends through Canada, the US, and down to Patagonia (Argentina and Chile).

While migratory birds (ducks and other waterfowl) appear to be spreading the disease, it’s also infected backyard chicken flocks in the Northwest. So far, commercial flocks have been unaffected.

With an infected bird found in Utah earlier this week, officials are asking everyone on the Pacific Flyway to keep a look out for infected birds. This mostly means hunters, hobbyists, and commercial bird flocks.

-May appear wobbly or unsteady
-May appear lethargic, confused, or slower than normal
-May be found dead randomly

Officials want any of the above reported to authorities, whether that’s your game warden, local wildlife biologist (university), or Game and Fish Office. Do not approach dead birds that you did not kill yourself.

If you have your own flock, wear appropriate gloves and facemasks when handling the birds, especially when treating them for skin injuries. Keep your flock away from wild birds, and quickly report and euthanize any birds that show symptoms.

If wild birds land in your yard, near your campsite, etc. sanitize anything they’ve touched.

Bird flu runs the risk of spreading to humans and other animals (different strains have infected everything from dogs to seals, and of course pigs), although this particular strain has not, yet.

Usually the first people infected are those that interact directly with animals, and it takes several infections before the virus mutates to a more transmissible form. Usually. There’s some fear that flu viruses could learn from each other, and there’s a few hotspots in the US that scientists are keeping an eye on. Luckily, for now, most of those are on the east coast.

Any flock owners want to weigh in?