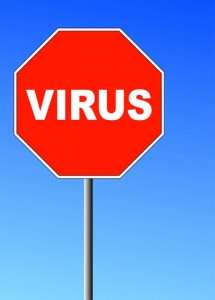 Yes! And I hate that this is even a question, but for reasons that aren’t clear there’s information going around saying that colloidal silver is only effective on bacteria.

Actually, colloidal silver is antimicrobial—not just antibacterial. It works on bacteria, AND viruses, AND some fungi/yeast.

We know a lot about how colloidal silver works to kill bacteria—it basically suffocates them. We’ve done this research because antibiotic resistance is a growing problem, and silver’s method is different than antibiotics, which work on the outside of bacteria, sort of picture them attacking the shape, and the shape can vary between types of bacteria, and change between strains making them resistant to old antibiotics. Silver works on a more fundamental part of the bacteria, which is why it can kill things like MRSA, and isn’t at risk of creating bacterial strains that are resistant to it. And, again, because antibiotic resistance is a huge, looming problem we should all be 1000% more concerned about, we’ve looked pretty closely at how all this works, and can give a high degree of certainty about it.

BUT—That doesn’t mean there hasn’t also been lots of research on colloidal silver (or nano silver) and viruses. In fact:

– And another has shown that Nanosilver kills the virus influenza.

– In practice, colloidal silver has been successful against late stage rabies (also a virus).

I’m sure there are more examples. And more research—there’s a reason Nanosilver has gone commercial and appears in many, many products sold as antimicrobial. What I’m not sure about is why people are campaigning about silver not killing viruses—I can’t see the motive, since it’s popped up on general blogs, and not obviously commercial blogs.

Anyone know where the backstory to this is?

*An important side note: when it comes to viruses, size does matter. Smaller particle size seems to be important in how well silver kills viruses, so always read carefully when looking at colloidal silver products.