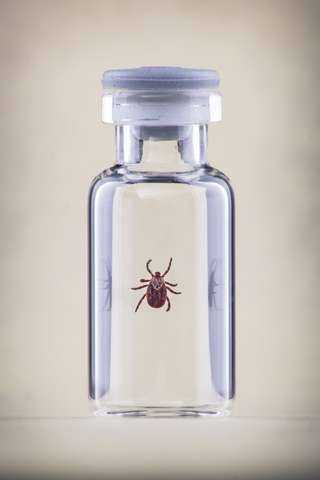 First—the good news. While the Asian Longhorned tick is known for carrying deadly germs, it hasn’t brought those germs with it to the other places it’s spread to—but it’s quick spread is creating a large potential reservoir for disease.

Second—it’s an aggressive biter. It may not be carrying pathogens in the US, but it will sure be an annoyance.

Third—the Asian Longhorned tick is a threat to animals. It can swarm, covering livestock (and potentially pets) with ticks. While it’s been cleared of carrying deadly human pathogens, it does carry a parasite—from the genus Theileria—which can cause anemia and is potentially fatal for animals. In Asia, contact with infected livestock is how most people contract and die from the diseases it carries.

Fourth—the ticks are similar in size to deer ticks, and the nymphs are tiny and easy to miss. This will complicate tick identification and prevention efforts, as well as create more confusion and problems with getting Lyme Disease (and other tick-borne illnesses) diagnosed.

Fifth—researchers are still facing a lot of unknowns. Can the Asian Longhorned tick transmit Lyme Disease or other native pathogens? How did it get here? How do we control it?

The biggest thing to take away is that everyone needs to be aware of ticks, and how to prevent tick bites. It was recently announced that Lyme Disease (and the ticks that carry it) is in all 50 states. A decade ago Lyme Disease was primarily known as a problem for the Northeast corner of the US—but doctors and anyone who spends time outside needs to come around to the new reality.

Prevent ticks by keeping your yard manicured. Long grass and other shrubbery aid ticks, and any places that mammals, from small rodents to deer can come in (or hang out, like wood and rock piles) are a potential source for ticks. Outdoor pets can even bring ticks indoors, and are similarly at risk for tick-borne illness. When in long grass, wear long pants and shirts to reduce your skin’s exposure to tick bites, then sweep yourself off before heading in.

Because prevention only goes so far and there’s always the unknown, be sure to get daily immune support from colloidal silver. Colloidal silver has been used for centuries to support the immune system, and even to aid skin with wound healing (so you can soothe skin post tick-bite, sunburn, or scrape).