The Flu Is Still Raging 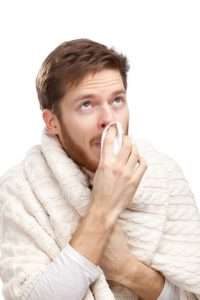 Whether it’s the lackluster flu shot this year, or it was just time for a bad season (every two to three years is a bad flu season), influenza has barely peaked this year.

Don’t think that warm weather excuses you, either: in the middle of January, 46 states had widespread flu activity. This year, it’s not just quantity, but quality of flu cases too—deaths and hospitalizations are both up.

What’s going on? We’ve got bad strains in the mix: H3 strains tend to be more virulent, and this year’s flu shot missed the mark when they guesstimated which strains would need to be included (generally, it takes two year to develop a flu shot, but in recent years they’ve found ways to rush the lead time down to 6 months or so).

At only 23% efficacy, the flu shot isn’t offering much protection. Remember, the people in that 23% are the young, hardy people who aren’t at as much risk from the flu.

A national dialogue has also opened up about sick days, and the fact that most workers don’t have them, and specifically, the part of the workforce that most deals with the public—waiters, chefs/fast food “cooks”, retail salespeople, etc. It’s at least one good thing to come out of ebola—we’re taking disease transmission more seriously.

If the bad “regular” flu season isn’t enough, North Americans have to deal with bird flu this year. All along the pacific coast and some ways inland, wild birds migrating along the Pacific Flyway are carrying bird flu. So far, only pet/hobby flocks have been infected. (One Canadian returned from China recently with a different strain of bird flu).

How to avoid the flu:

-Wash hands frequently
-Run a humidifier
-Take good care of yourself: support your immune system, do a sinus rinse if you get stuffy, drink lots of water—before you get sick!

If you get sick, stay home. You need the rest—flu can last a lot longer when you don’t take care of yourself, or it could boomerang around the office.

Have you noticed how bad this flu season is?