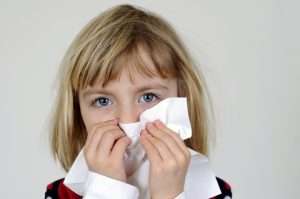 The northwest has been dealing with state wide Whooping Cough (Pertussis) epidemics for some months now. As it spreads across the country and babies, infants, and children begin to die in other states, it’s making the national news.

Something that I speculated about with the Washington epidemic has also been confirmed: this isn’t about parents not vaccinating their kids. Years ago, during the California outbreak when a bunch of babies died, avoiding childhood vaccinations was the clear cause. This time, school age children who are up-to-date on their vaccinations are being affected.

Why? Around 1990 the vaccine was updated to reduce side-effects: fewer rashes, etc. Now we are seeing what may be a weakness in the new, milder vaccine: it wears off faster. The current CDC recommendation is that everyone get the TDaP (Tetanus, Diphtheria, and Pertussis) booster. (Worth noting: Pertussis may be stronger, or slightly different, than what the vaccine protects against this year).

It’s most important for adults and teens to receive the booster, especially if they work with kids. Whooping Cough symptoms aren’t easily identifiable in adults: it just looks like a slightly more severe cold. Adults might find themselves with a stronger cough, but the term “Whooping Cough” comes from kids’ symptoms: the cough is so severe it empties their lungs of air (making the “whoop” sound), turning them blue. In babies, a whooping cough is often fatal.

Because this is becoming a nationwide epidemic, take any cold like symptoms to the doctor and specifically mention you are interested in a diagnosis.

With Whooping Cough spreading from the northwest, and Tuberculosis likely to be spreading from the southwest (Florida has a growing epidemic), you need to start thinking like it was 50+ years ago: stay home or only go out to the doctor’s if you have a cough. Avoid others who have coughs. Keep babies and small children away from sick adults, who may have a more serious virus than it appears at first glance.

As bacteria evolve past usable antibiotics (even if we keep developing them, we’re reaching a point where side-effects are comparably severe to the disease), and viruses change faster than the recipe in vaccines, we’re entering what could be a scary time. Some are looking to nanoparticles for the future, but that’s still years away from FDA approval.

Do the news stories have you worried? Share your fears below: